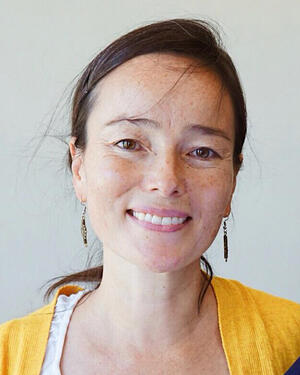 Kim Thuy Seelinger focuses on sexual and gender-based violence in the context of armed conflict and forced displacement. A Visiting Professor at the Law School, Seelinger is a Research Associate Professor at the Brown School of Social Work, Public Health, and Social Policy. She will also serve as the inaugural director of a new Center on Gender, Migration, and Human Rights, based at the Washington University in St. Louis Institute for Public Health. Seelinger teaches courses on refugee protection, wartime sexual violence, the investigation of international crimes, and the application of international criminal law in national judicial systems. Prior to joining Washington University School of Law, Seelinger taught at the University of California, Berkeley, School of Law, where she directed the award-winning Sexual Violence Program at the Human Rights Center from 2010-2019. Before her work at Berkeley, Seelinger focused on gender-asylum cases and policy as a Staff Attorney at the University of California, Hastings, Center for Gender and Refugee Studies. She started her legal career as a Kirkland and Ellis Public Interest Law Fellow with the Lutheran Family and Community Services in New York City, where she provided deportation defense to low-income immigrants in the immediate wake of 9/11. Seelinger has won several awards including the Women of Berkeley Law’s “Women Advancing the Law – Practitioner of the Year” Award (2019), the International Association for Gender Equity and the Law “Human Rights and Leadership Award” (2017), a Rockefeller Foundation Bellagio Residency (2016), and the Kathi Pugh Award for Exceptional Mentorship of Berkeley Law Students (2015). Her writing has appeared in several academic and news journals, including the California Law Review (online), the Columbia Human Rights Law Review, Foreign Affairs, the Washington Post, the Guardian, and PLOS Medicine. She is co-editing a volume on the trial of Hissène Habré, forthcoming from Oxford University Press (2020).