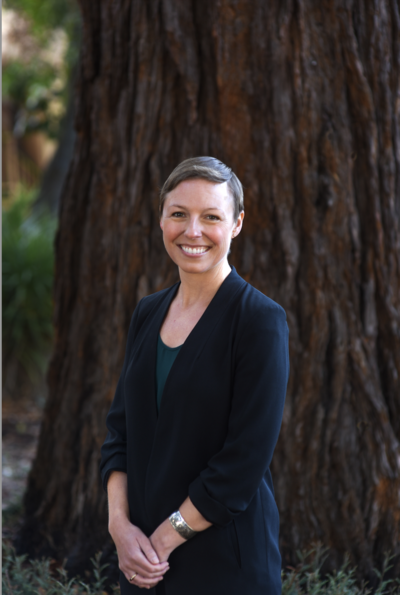 Growing up, Betsy Popken had one summer vacation that remained the same. She and her family would pile into a car from their home in Petaluma, driving north to a secluded lake in the High Sierra. Popken and her two sisters would spend a week exploring the vast natural world around them with kids from other families, all of them returning every year to the same set of rustic cabins.

Although it wasn’t until Popken graduated with her Bachelor’s degree that she started spending significant time abroad, her worldview was expansive from her upbringing.

“I remember from an early age we would have conversations around the dinner table about what was going on in the world,” Popken said. Her parents both studied international relations in college, and it felt natural for her to follow in their footsteps.“My passion for what’s going on in the world and paying attention to it and learning from it really started with them.”’

Following her graduation from UCLA with a degree in political science and minors in public policy and English, Popken worked at the Pacific Council on International Policy, an independent organization promoting global engagement in California. While deciding which advanced degree to pursue, Popken noted that many of the Pacific Council members whose work she admired were lawyers, so she too chose that path. After two years at the University of Southern California School of Law and one year at the London School of Economics and Political Science, Popken graduated with a JD and an LLM in international law.

Because she graduated in 2010, in the midst of a deep economic recession, the hiring market was bleak, but the law firm where Popken had worked as a summer associate, Orrick, Herrington & Sutcliffe LLP, granted Popken and her peers an opportunity to work full-time for a year with one of their pro bono clients. Popken chose to interview for a fellowship with the Public International Law & Policy Group (PILPG).

“To me this was an excellent opportunity,” Popken said, “I had just been studying public international law and now I actually got to find a place where I can go practice it.”

In her capacity as a fellow, Popken would go on to support the UN-mediated Darfur peace process in Doha, among other projects. The experience of planning for peace negotiations was a profound experience, and one that would inform her work going forward. “Working with them on the nuts and bolts of how to bring peace and calm to their country was really impactful,” Popken remembered.

Then, the Arab Spring began. Popken began working with the Libyan National Transitional Council on ceasefire negotiations, which ultimately were not pursued. Her primary focus quickly recalibrated to Syria as the regime began targeting civilian protesters in 2011. She regularly supported the Syrian opposition negotiating team in UN-mediated negotiations, and conducted trainings throughout Europe and the Middle East for opposition leaders. Today, she recalls that work as some of the most meaningful in her career. “The level at which I was operating was so much higher than anything I had done previously,” Popken said, describing meetings with Ambassadors and Special Envoys. “It was about working at the place where things were happening, and helping to make those things happen.”

Popken transitioned to Orrick following her fellowship, but continued her pro bono work on the Syrian peace negotiations with PILPG. She took a three-month secondment and nearly two-year leave of absence to work full-time with PILPG as Chief of Party and head of their Istanbul office during the Geneva II peace talks in 2014 and Intra-Syrian peace talks in 2015–2016.

In her time at Orrick, Popken went on to co-found and lead their Business & Human Rights practice and help launch the firm’s Environmental, Social, and Governance practice as the firm’s Sustainability & Human Rights Counsel. It was here she began adopting a human rights framework to novel issues brought by emerging technologies.

“When I think of the impact technology had on the Arab Spring, I think [my interest in responsible technology] really started there,” Popken said, citing how Facebook and Twitter were mobilized for protests and information sharing, as well as documentation of human rights abuses. Her interest in the intersections of technology and human rights bridges easily with the Human Rights Center’s groundbreaking work on digital open source information.

“When I think of the impact technology had on the Arab Spring, I think [my interest in responsible technology] really started there.”

“The Human Rights Center’s leadership and expertise in the area of human rights and technology excites me,” said Popken. “I can’t wait to see where else we can build a bridge with technology — in our existing work on health and human rights, and in new areas like the environment and business and human rights.”

After returning to the Bay Area from Turkey, friends who had moved into the technology sector started reaching out to Betsy with human rights challenges they were encountering in industry practice, particularly with respect to content shared online and the development of new technology. Popken taught herself the field of Business and Human Rights to help address these issues for clients. “The impact that you can have by making sure technology is developed and used responsibly, I felt like that was one of the bigger impacts I could have here in the Bay Area,” she reflected.

Once settled back in San Francisco, Berkeley Law School’s Human Rights Center immediately came on Popken’s radar. She’d met Alexa Koenig, Executive Director at the time, and Eric Stover, Faculty Director, upon returning from Istanbul. “The Human Rights Center was getting such praise from international organizations,” Popken remembered. “The impact of the work was just so clear.”

Popken continued her work with Orrick and her pro bono projects with PILPG, and when the role of Co-Executive Director was posted, she knew it was her “dream job.”

“We are thrilled to welcome Betsy to the Human Rights Center team,” said HRC Co-Executive Director and Co-Faculty Director Alexa Koenig. “Her breadth of experience and diverse perspectives on human rights is truly stunning–ranging from frontline to government to legal practice–making her an ideal person to lead our multidisciplinary team into its next decade.”

“The Human Rights Center is not just practicing international human rights, it’s helping to shape it,” Popken said when reflecting on the career trajectory that has brought her around the world and back to the Bay Area, where she grew up.

“I’m really looking forward to working with our team to take the Human Rights Center to the next level.”