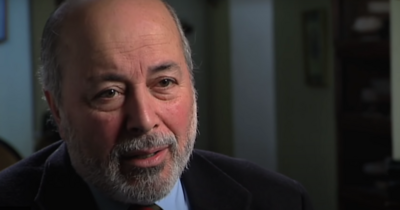 Human Rights Center Advisory Board member Elizabeth Farnsworth who—with Patricio Lanfranco—co-directed and produced The Judge and the General, a film about Judge Guzmán, remembers the deep skepticism among Chile’s human rights community when he was appointed to investigate murder charges against Pinochet. After all, Guzmán had toasted with champagne Pinochet’s 1973 coup against President Salvador Allende. After an investigation that Guzmán described as “descending into the abyss,” he defied expectations by having Pinochet’s immunity from prosecution lifted and indicting him for murder and kidnapping.

One of the judge’s witnesses was investigative reporter Mónica González. She tells this story in Farnsworth’s film:

Guzmán is the son of Juan Guzmán Cruchaga, a Chilean poet, and, in high school, we had to memorize one of his poems. Generally one doesn’t like poems you’re made to read, but I really liked that poem, and it is forever imprinted in my mind. Part of it goes like this:

for you to arrive.

I thought the poem reflected our situation because we’d been waiting for so long for a judge, but I saw few indications that Judge Guzmán would be up to the task. When I told him that, he said, “Well, I don’t want to be that extinguished lamp.”

Judge Guzmán not only cast light in Chile but also at UC Berkeley, where, as the guest of the Center for Latin American Studies and Human Rights Center, he lectured several times during his investigation. Though Pinochet died under house arrest in December, 2006, before he could face trial on more than 300 criminal charges, the pursuit of justice by Judge Guzmán is a high point in the history of international human rights law. We at the HRC feel fortunate to have known our friend, Juan Guzmán. We send warm wishes and sympathy to his family in Chile.