A Legacy of Truth: Forty Years of Investigating the Forcibly Disappeared 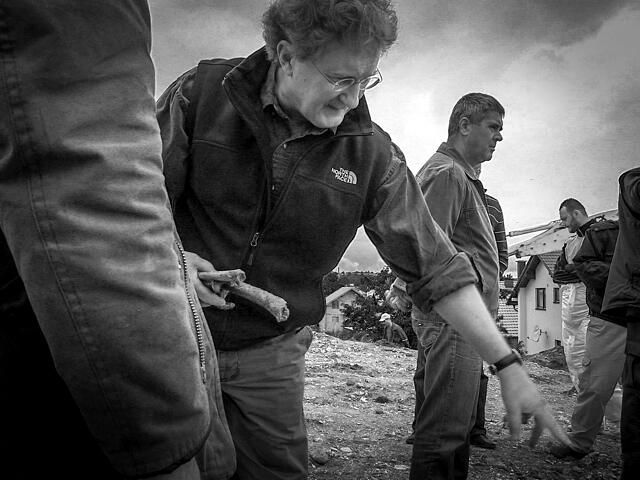 Eric Stover has spent much of his life with communities searching for an answer to the agonizing question, Where is my child?

From Argentina, Guatemala, and El Salvador to the former Yugoslavia, Rwanda, and Iraqi Kurdistan, Stover has sat with families in their deepest grief — often taking the first step in answering that harrowing question with a simple cheek swab, or a sample of blood or hair.

“One of the strongest human forces is a mother or father looking for their disappeared child,” Stover said, reflecting on the common threads he’s encountered in his global work. The United Nations has memorialized August 30th as the International Day of the Victim of Enforced Disappearances for the last twelve years, and this year will commemorate the 30th Anniversary of the Declaration on the Protection of All Persons from Enforced Disappearances.

Stover, whose work has shaped UC Berkeley’s Human Rights Center for the last 26 years, has been at the forefront of identifying victims of enforced disappearances. Since the early 1980s, he has worked with forensic scientists and geneticists to identify the remains of the missing, collect evidence for courts, and set the historical record straight on the plight of the disappeared.

Eric Stover at a grave site in Bosnia in 2016, during the filming of the PBS documentary "Dead Reckoning."

In search of stolen grandchildren

Stover first became involved with investigating forced disappearances in the wake of Argentina’s “Dirty War” (1976–1983) while directing the Science and Human Rights Program at the American Association for the Advancement of Science (AAAS). During the conflict, the Argentine military detained hundreds of pregnant women who were imprisoned until their babies were born. The women were then executed and buried in unmarked graves, while their children were given up for illegal adoption to military and police personnel.

The grandmothers of these stolen children soon formed an organization known as the Abuelas de Plaza de Mayo — so-named because of their weekly public protests in a public square directly across from the presidential palace in Buenos Aires. Along with thousands of other Argentines, the children are called as los desaparecidos, “the disappeared.”

“Enforced disappearances became a phenomenon of repression in the 1970s and 80s,” Stover said, citing its use by authoritarian regimes not only in Central and South America, but throughout Asia and Africa as well. “One of the ways of silencing the opposition was through disappearing people and then saying, ‘We know nothing about it’.”

As Argentina began transitioning back towards democracy in the early 1980s, Stover received a visit from two representations of the Abuelas de Plaza de Mayo. They wanted to know how emerging techniques in genetic testing might be used to locate their grandchildren, return them to their biological families, and bring those responsible to justice for child theft.

Argentina’s new civilian government also asked Stover to bring a team of forensic scientists to Argentina to begin the exhumations of the mass graves. “It was a no brainer,” Stover said, “There were so many scientists out there who wanted to contribute, particularly on the question of the disappeared,” Stover said.

“Science could be a tool that could be used, one, to help the families find their missing loved ones, and two, to do it in a scientific way — a way in which it would be court admissible.”

In a matter of weeks, Stover assembled a team of forensic scientists to travel to Argentina. The group included renowned forensic anthropologist Clyde Snow, who led the exhumations and later trained Argentine students to carry on the work. Stover also brought geneticists Mary-Claire King and biochemist Cristián Orrego Benavente, who worked with their Argentine colleagues to develop a technique for identifying genetic markers to determine if an avowed grandparent could be confirmed to a high degree of certainty as related to a disappeared child.

As DNA testing revealed the origins of children suspected as stolen, the Abuelas further lobbied for the establishment of the Banco Nacional de Datos Genéticos (BNDG) — a national genetic bank to store the DNA profiles of grandparents and other relatives of disappeared children through the year 2050. The BNDG currently holds profiles for more than 300 families, and is a living testament to the tireless efforts of the Abuelas to find their disappeared grandchildren. 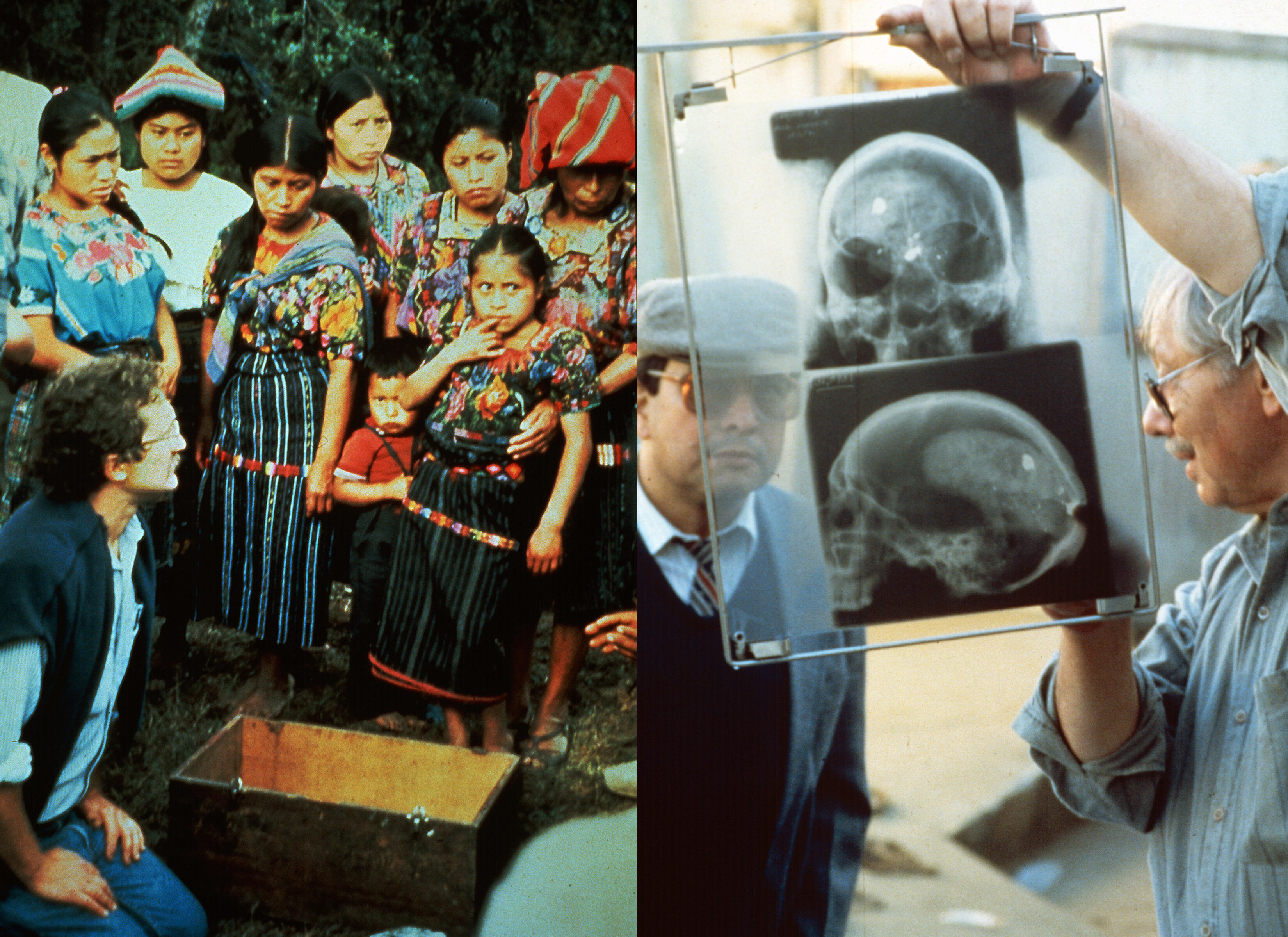 Left: Eric Stover at the first exhumation of a mass grave near Chichicastenango, Guatemala in the early 1990s. It was believed to contain the remains of villagers who had been executed by the military. He is asking permission, from family members who believe the grave contains their loved ones, to remove the remains so they can be taken to a hospital to be examined. Photo by Pamela Blotner

Right: Forensic anthropologist Clyde Snow shows a Guatemalan judge bullet fragments embedded in the skull of one of the first victims exhumed from unmarked graves near Chichicastenango.  Photo by Eric Stover

El Salvador’s disappeared children, and the founding of Pro-Búsqueda

As Argentina confronted the aftermath of military rule, Salvadoreans were faced with mass disappearances and extrajudicial killings perpetrated by their own government. In an effort to quash a growing leftist opposition, an estimated 75,000 people were killed — and another 9,000 forcibly disappeared. Children were again targeted for kidnappings and abductions, and given up for adoption through both quasi-legal and illicit channels.

Families of the disappeared children joined efforts with a Jesuit priest named Padre Jon Cortina, whose parishioners in Guarjila, Chalatenango recounted horrific stories of government soldiers stealing their children during El Salvador’s civil war in the 1980s. Together they created the Asociación Pro-Búsqueda de Niñas y Niños Desaparecidos (Organization in Search of Disappeared Children), to find the children and secure justice for their birth families. They conducted hundreds of interviews with relatives, collecting years of testimony to strengthen their search.

In 1992, Padre Cortina contacted Stover, who was now the Executive Director of Physicians for Human Rights, for help with this herculean task. Stover and forensic pathologist Robert Kirschner met Padre Cortina and the families in El Salvador to start collecting DNA samples from family members of children abducted during the conflict and given up for adoption in the United States and Europe. As stories of positive familial matches spread through the country, public interest in DNA testing increased tremendously.

To meet Pro-Búsqueda’s increasing demand, Stover and his colleague Cristián Orrego engaged the California Department of Justice’s Richmond DNA lab to aid in the development of a DNA database. The DOJ scientists worked nights and weekends for no charge, creating genetic profiles with the samples delivered from El Salvador. Stover, who’d already started working with Berkeley’s Human Rights Center, then launched the center’s seminal Forensics Program with Orrego at its helm to directly support the work of Pro-Búsqueda in finding disappeared children.

Together, the team eventually secured funding to establish a DNA database at Pro-Búsqueda itself, bringing on Salvadoran geneticist Patricia Vásquez to run it. Today, DNA is collected from families of the disappeared, or individuals who suspect they were illegally adopted. Analysis is conducted in forensic labs in Guatemala, the United States, or Europe. The resultant genetic profiles are tested against each other and stored in the DNA database, where it’s hoped they will eventually yield a match.

It’s estimated that at least 994 children were abducted and given up for illegal adoption during the Salvadoran Civil War. As of 2014, 561 cases are yet to be solved. Vásquez continues to monitor Pro-Búsqueda’s database, and persists in her search for hundreds of El Salvador’s disappeared children. The Human Rights Center continues to provide technical support to Pro-Búsqueda, and the two organizations will soon release a joint guide on DNA reunification of families.

Digital tools for investigating the disappeared

Just as DNA testing irrevocably changed how enforced disappearances are investigated, advanced digital technologies are modifying the field in profound ways. Digital investigation techniques refined at Berkeley’s Human Rights Center have been codified in the Berkeley Protocol on Digital Open Source Investigations, the first international guidelines for the documentation, preservation, and analysis of digital evidence of human rights violations.

Facts uncovered by digital open source investigations can complement physical, testimonial, and documentary evidence, Koenig explained, citing the use of satellite imagery, social media, and detailed searches on government websites or the dark web to “provide helpful new data points that can be used to fill in gaps in more traditional forms of evidence, or corroborate or disprove what you learn from traditional sources.”

“New technologies offer a number of promising opportunities to support investigations and cases, and ultimately to secure justice for those who’ve been disappeared, their communities, their families, and all who’ve been affected,” Koenig said.

While there is much promise in the incorporation of new technologies in the search for the disappeared, the weight of forced disappearances on affected families is as heavy now as it was when Stover began his work in Argentina 40 years ago.

“The psychological impact hasn’t changed, and the greater impact on the communities hasn’t changed,” Stover said. “The focus and passion of finding your disappeared loved one will always remain.”